Diltwyler Whitfoot son of Wyleg Whitfoot, son of Wymran, son of Bwilag, son of Everand Whitfoot, of the Michel Delving Whitfoots. A prominent land owning class of Hobbits who at times have held mayoral positions and are attributed to the keeping of and curating the Delving Mothom-House. Of respectable dignified social standing they enjoy gossip, books, food, and jests, nary to be found more than a league from home for any but the most necessary party or social gatherings polite to but not interested in the goings on of Dwarvish boorishness or Elven follies, dealings with men are restricted to merchants knowing the problems that follow in their footsteps.

His mother Dlelli Noakes daughter of Mungo Noakes a working class chimney digger living near Big Oak on the outskirts of Hobbiton. Wyleg of the prodigious Whitfoot family felli in love with and married the Hobbit lass whom was a regular visitor of the Delving Mothom-House. A love for mothoms and the spirit of the tall world Dlelli was a dreamer but kept to a respected lifestyle.

After his coming of age 3 years ago young Dilt took a fancy to travel. He roamed the shirelands close and near even making it as far as Stock to gaze accros the water on Bree soil. Though discouraged by family on principal these spirited bouts were loathsome to his father as he hoped his son would win over his wild habits in loo of taking up a household of his own and rearing little hobbits to proginate the family name.

Instead Diltwyler got the itch to explore the lands of the tall folk under the guise of a mushroom merchant. Though in his heart he desired knowledge. The lores and songs of the elves. Crafts and recipes of the hearty dwarves. And the triviality of the rash men found throughout the lands of Middle earth. They may have less to offer but much legend has been passed of their quirky blundering adventures.

If naught else is to be had a full belly and exotic mushrooms for trade would be considered a fufilling and fanciful conclusion to the adventure. As to a beginning Dilt joined with a caravan in Bree at the Prancing Pony spoken of in the mythos of Baggins Barrel -Rider and the Grey Wanderer en route to the mysterious Laketown in the East. 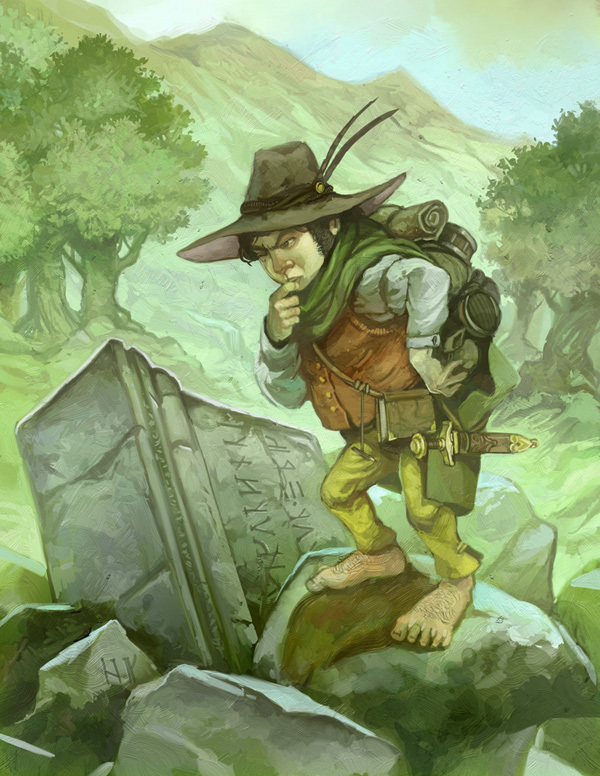